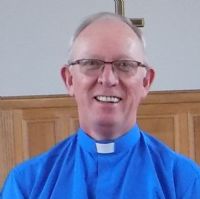 My name is Revd Mark Bates and I am a United Reformed Church minister of three churches in the Wirral. My background is that I served in Lancashire Constabulary for 30 years, serving in East Lancashire. I married my wife Gill in 1983 and we have two children, Jennifer and Jonathon.

I haven’t always been a Christian, having allowed God to speak to me in 1994 my journey of faith and discipleship started.   Having listened to God and what I felt in my heart I candidated for the ministry in 2004 and was accepted for ministerial training through Northern College based at Luther King House Manchester. I did my degree in Contextual Theology part time whilst still a serving police officer. I completed my studies in 2011. I was called to three churches in Bolton and was Ordained and Inducted in September 2011. I served the churches and community and last year felt that I was being drawn away from the Vision pastorate.

I looked at the North Wirral Pastorate in September and asked to see the full profile. I met with a group of people and looked round the three churches of Marlow Road URC, St Andrews URC, Meols and Trinity with Palm Grove LEP in Oxton.  I was invited back to preach in two of the churches on the 19th January 2020 and the following week all three churches met and voted to offer me the opportunity to serve them. I accepted the call and then began the preparations for my move.

Having eventually made the move on the 15th July so begins my ministry with the churches. At the outset I had great plans of meeting as many people as possible from the churches to try to understand the feeling within the churches. Thanks to Covid 19 this is not possible!

I am excited about what God has planned for all three churches and the church as a whole during these challenging times. The plans that I have made in the past have usually been changed by circumstances and God never fails to surprise me. I think the challenges that lie ahead involve working with the fellowships and trying to ensure that no matter what happens all members and friends in the churches are valued and are able to have their voices heard.  I also would like to get to know the groups who have used our buildings in the past and who want to return.

What is certain is that we are all finding new ways of being church. Church is the community of people where love and support for each other is paramount, as we try to live out our Christian values. Church is not the building!