Called to be God’s people, transformed by the Gospel, making a difference in today’s world. This is the United Reformed Church.

Although one of the smaller mainstream denominations, the United Reformed Church plays a dynamic and challenging part in the British Christian community. It has brought together English Presbyterians, English, Welsh and Scottish Congregationalists, and members of the Churches of Christ. Sixty one thousand people make up 1500 congregations, with nearly 600 ministers, paid and unpaid.

The church in Meols was established as a Presbyterian Church in 1894 and, following the creation of the United Reformed Church in 1972, joined with the former Hoylake Congregational Church to become St Andrew's Hoylake with Meols in 1987.

Today, as St Andrew's United Reformed Church Meols, we are a community of Non-Conformist Christians who work together as explorers seeking to understand how God is speaking into today's world. We do not pretend to have all the answers and welcome everyone who would like to share with us on life's journey. 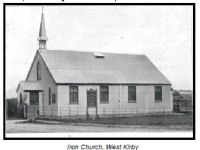